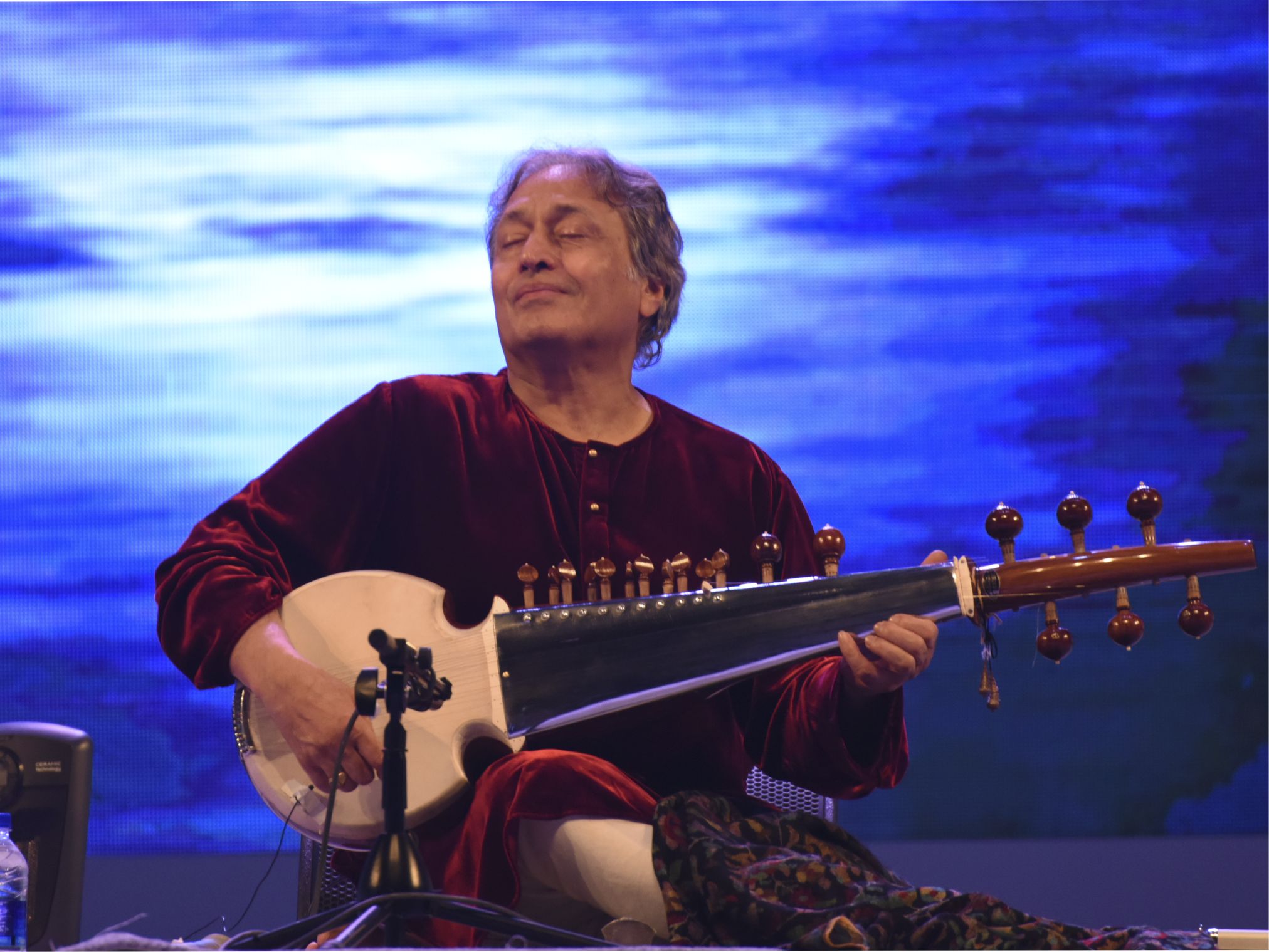 If this is taken as a key then Anahata Naad – the unstruck, mystic sound that occurs spontaneously and which can be experienced through meditation – is the first music. Anahata Naad is silence. One has to first learn to listen to this silence, be attentive to it and immerse oneself in it. This is valid both for the performer and the listener but more so for the performer. This could be the first step towards becoming a performer and to some extent, being a good listener.

This article is born purely out of my personal enthusiasm generated by the first music conference organised by Bengal Foundation, in 2012. Since the early fifties, I had the opportunity to listen to many concerts and music conferences both at Kolkata and Dhaka, but I had never truly witnessed so large a congregation of music-lovers and one as beautifully organised, as the Bengal Classical Music Festival. To crown all, it happened in Dhaka, where it was least expected.
I have tried to forge this article with the knowledge gained from nearly 65 years of conscious listening to performances by some of the legendary musicians of the last century, and through discussions with artists. I was close to some of the leading names in the concert circuit, Bade Ghulam Ali Khan, Vilayat Khan, Nissar Hussain Khan, Asad Ali Khan and Amanat Ali Khan, among others. I had, in my time, received practical training both in vocal and instrumental music, and later spent time reading and reflecting on the subject.
The history of music and modal structure of ragas is unclear, but that does little to affect music and the ragas, as they now stand. There is a great deal of confusion about the origin of ragas, their authentic form, nomenclature and related issues. Most of what is presented as arguments seem invalid since there are no exact records. If, back in time, the placement of notes was different, the names were different, the chalans or movements were different, then what exactly has remained of that music? It is perhaps best to accept the ragas as they are presented today and work around that.
We share a common heritage with north India, which is based on the depiction of music through ragas. The ragas in turn are modal pictures constructed through the use of sound, silence and tempo. Each is a clearly identifiable and consistent unit. Classical texts refer to nine stable rasa (loosely attributed to ‘mood’) and thirty-three fleeting moods, which an artist, musician or dancer can evoke through the presentation of a modal picture of his art.
Jalaluddin Rumi (13th century) said, ‘Silence is the language of God, all else is poor translation’. If this is taken as a key then Anahata Naad – the unstruck, mystic sound that occurs spontaneously and which can be experienced through meditation – is the first music. Anahata Naad is silence. One has to first learn to listen to this silence, be attentive to it and immerse oneself in it. This is valid both for the performer and the listener but more so for the performer. This could be the first step towards becoming a performer and to some extent, being a good listener.
Here is a simile, mainly for the musician. In my opinion, ragas and raginis (a derivative melody related to a raga) exist as true bodies in an invisible world. The artist has to see it first in that world and learn to recognise it. The artist should then try to concentrate on the form or roop of the raga, in order to draw it out of its invisible world, and present it to listeners in a manner that they may know and recognise. To achieve this, the performer will have to master the use of sur (musical notes, tone) and taal (tempo, rhythm), through rigorous practice.
Whil the concept of the raga may be comprehended within a relatively short period, it would take many years of practice under the guidance of a proper teacher, to be able to draw out the raga from its abode in the invisible world. Indian classical music is rooted in parampara, the preceptor-disciple tradition, in which knowledge is imparted through a developing relationship between the guru and the pupil. The bond can evolve at a spiritual level where the continuing presence of the teacher, and the attendant pupil, causes a transmission of advanced knowledge. Today implements such as books, CDs, the internet, and personal reflection have to fulfill a part of this task. To find a proper guide and teacher is both rare and difficult, especially nowadays. However, assuming that it is possible, what is the next task of the performer, who is now poised to become an artist?
It is unfortunate that many aspects of an artist’s training concentrate more on the refinement of the outer core, that is, establishing technical prowess, and have less to do with the inner essence or soul. The body is useless without the soul; while the soul is incomprehensible without the body. Building the outer core allows the musician to apply a note correctly and to gain control over the tempo. The performer gradually perceives the concept and structure of ragas and learns compositions on different ragas. The next step is to understand the space between the notes and learn different techniques of using this space. In musical terms, it would mean learning gamaka (an ornamentation used in Indian classical music), meend (glissando), taan (a virtuoso technique used in vocal performance) and variations in taal (rhythmic structure), among other things. Collating so many aspects of the training requires years and years of practice. The point is, what does this deliver in the end? What is the final objective? Is it just the capacity to render notes correctly and to hold them at a certain tempo, or to sing a raga correctly as per the training? Years of effort may enable a pupil to use the tools efficiently and effectively—is that what music should be about?
I believe that the techniques, once learnt, prepare the pupil to finally approach ‘music’. The goal is to produce music which will transcend the intellect and enter deep into the ‘heart’. This is done through the presentation of ragas, but not just as a sequence of learned notes and phrases.

Referring back to the simile, it can be considered that in the invisible world of music, ragas exist as personalities within a clearly drawn structure. The artist is required to summon the raga from its invisible form into the material world. It is for the artist to make it visible. The artist has to know the raga clearly and fully, and only then, by using the tools at his disposal, will the artist be able to make the listener aware of its presence and its material form.
The artist must focus his attention in order to reach the inner world in which the raga resides. He should be in a tranquil mood, and allow the raga to be absorbed in his heart. The artist has to be able to perceive the flavour, the colours, the spirit of the raga clearly, and then manifest it gradually, with the help of musical notes and tempo. The sound and tempo will give the invisible form a visible garb. Ornamentation should be used with care, only to enhance the appeal of the raga. The structure of the raga should not be obscured by unnecessary embellishment.
The elaboration of a raga is a slow, unhurried process, which calls for a soft build-up. A common drawback is the artist’s inclination to substitute gradual raga elaboration with a noisy demonstration of technical prowess. A progressive, layer by layer improvisation and elaboration is the only way to fully construct and convey the beauty of a raga, to the listeners. A raga, when presented, carries the stamp of the artist’s own interpretation and comprehension of the raga. It is for the artist to decide how much the listeners will be able to absorb, and the excellence is in not overloading or overpowering the listener. Experience, brilliance and originality are important actors in deciding the extent to which the presentation will impact the listener.
At its apex, the music of this sub-continent takes into account the syncretic culture of a society that has been in existence for thousands of years. Simply put, ragas are receptacles for finely and subtly crafted nuances of moods, feelings, tones and aura. The modal structure of a raga is constructed in such a manner so as to be clearly discernible from another set of moods and tones, which will define a different raga. The prime objective of the artist is to depict these moods and convey them aptly to the listeners. It is true that the absorption of what is being presented, is argely dependent on the listener’s capacity to engage. When presented well, the music will create ranjakata in the heart of the listener. The word ‘ranjakata’ can be translated to mean ‘to colour or illuminate’. In musical terms this would refer to colouring the hearts and minds of the listeners. The colouring should be beautiful; it must render joy and focus on beatitude; it must impart a sense of wonder and bliss (anand). The listener too should be prepared to receive and accommodate this wondrous joy.

A good listener should possess a basic knowledge of music. At the risk of oversimplifying, listeners can be cast in three broad groups. There are those who come to hear and enjoy the music; those who come to learn from what they will listen to; and finally, there are the critics who will appraise the music. A good listener is one who first empties himself, and thereafter attunes himself to silence. If one can ‘listen’ to silence, one has crossed the first hurdle to listening well.
Imam Ghazali (11th century) states in his Ihya Ulum al-Din (The Revival of Religious Sciences), that a person’s heart is like a cave containing many jewels. There are diamonds, rubies and emeralds, and there are less valuable gems, as well as worthless stones and rubble. One has to take the help of music to enter this cave and extract the jewels. The way in, is through the portals of the ears, but music cannot bring out what is not there.
The classical music system allows the artist to produce a sound-picture of moods, by manipulating musical notes and the tempo, and by maintaining certain rules for depicting the raga. The musical structure is dynamic while the theme remains constant. If the listener is ready, the emotive appeal of the music can allow him to experience new feelings and moods. The discovery of these uncharted territories within his inner self can have great spiritual significance for the listener.
The music of this sub-continent is not a tool for mere entertainment or amusement. It is considered sacred and has to be treated with veneration both by the artist and the listener. Approached correctly, it can open up doors to unprecedented heights of satisfaction and bliss. This is perhaps the closest to what human aspiration has yielded in reaching out to the Infinite.

Alim-ur-Rahman Khan is an eminent thinker, noted classical music exponent and a connoisseur of music.

If this is taken as a key then Anahata Naad – the unstruck, mystic sound that occurs spontaneously and which can be experienced through meditation – is the first music. Anahata Naad is silence. One has to first learn to listen to this silence, be attentive to it and immerse oneself in it. This is…