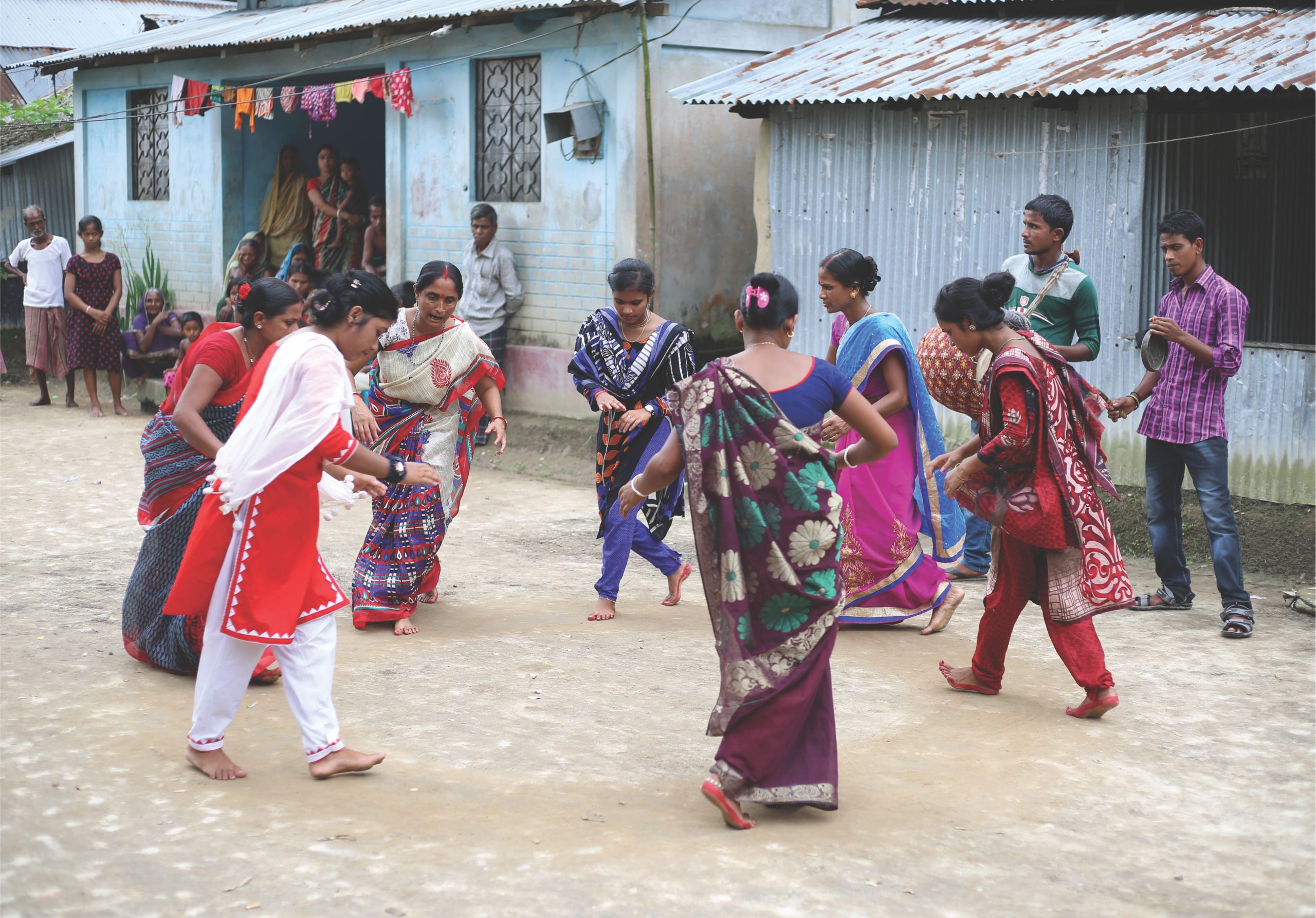 In the memory of

Dhamail in its truest form is where lovers dwell, where one cannot exist without other. Always expressed in twos; it is a song as well as the dance, the name and the act, and a plane where two souls unite. But to familiarise oneself with this ancient Bengali tradition, is to familiarise oneself with Radha and Krishna.
The lore of Radha and Krishna is not just another tale of love but a story of opposing forces longing to be united. Growing up amongst a community of cow herders in Vrindavan; Krishna would dwell under the shade of the trees, play with his friends and sometimes flirt with the milkmaids of the village as they came to fetch water from the river. At times Krishna’s flute would echo like the call of the nightingale and its melody would summon the milkmaids to his side. They would forsake their homes, families, husbands and honour. The women would encircle and dance around Krishna, entranced by his grace and beauty. But amongst the milkmaids, Krishna unconditionally loved one called Radha, and Radha’s devotion for him was equally pure.
Krishna was the eighth incarnation of the Lord Vishnu; a supreme deity who emerges as various avatars as the preserver and protector whenever the world is threatened by evil, chaos, and destruction. It was always his destiny to restore the balance of the kingdom. Krishna belonged to the world and not just to Radha—which was their lesson in love. When he came of age, Krishna had to leave Vrindavan and Radha waited for him there until her death.
Dhamail is a commemoration of the love shared by Radha and Krishna—despite the pain, anger and jealousy; the two shared an eternal bond that transcends life, death and reincarnation. Traditionally it is performed by women at weddings to celebrate the union of the newly wed couple. Songs are sung about the love story of Radha and Krishna and the dance resembles a carousel of women, similar to how the milkmaids would encircle and dance around Krishna. Men take up the roles of musical accompaniment. The intricacies of the dance are found within the footwork, claps, hand gestures, and the hips.
I first came into contact with Dhamail while shooting a documentary in Sreemangal, Sylhet. It’s often hard to find words that will do justice for something so experience-centric, but being exposed to it for the first time all I felt, and all I could see was the energy exuberating from the performers. There was energy in the vocals and there was energy in the steps; enough to instantly light up everyone in its vicinity, not just the patrons but the beginners as well.
Music was predominantly believed to be part of a divine connection in Bengali culture, ancient spiritual masters intended to speak about intricate ways of mystic practices, and music first emerged in the form of Buddhist chants. Over time, chants evolved into genres that went on to shape the lives of its patrons. To an outsider, these songs appear to be about nothing more than the people and their lives. But in truth, they often hold secrets of mystic practices, experiences and emotions of the masters in their pursuit of enlightenment.

However, to my discovery, Dhamail is no longer seeded in its spiritual roots. Today, it is more of an act of celebration than anything else—performed by both Hindu and Muslim members of the community. It has transcended all boundaries of religion, convention, and borders. It is difficult to trace an exact point in time when Dhamail first emerged, but the tradition first originated in Sylhet during the time of a unified India and had its influence in the surrounding regions. Presently it is practiced in all districts of Sylhet, as well as in Netrokona, Kishoreganj and Bhramanbaria in Bangladesh; and Cachar, Shillong, Karimganj, Hailakandi, Assam, and Tripura in India. Furthermore, it is no longer exclusive to weddings, but Dhamail is also performed after a successful harvest, after a child is born, and at pujas, amongst other occasions; primarily by women but male Dhamail groups have also emerged in recent times.
Approaching the information age, as cultures collide, the influence of Bollywood and western music makes more of a presence amongst the youth, resulting in newer generations of patrons becoming outsiders to these practices, with its secrets lost in time.
Anjali Chakrabarthy has been a Dhamail performer since she was a young girl. She explained, ‘Young girls are more swayed by the glamour of foreign music than they are by Dhamail. At weddings nowadays, Bollywood has a greater influence—we just don’t find as many opportunities to perform as we used to.’
She added, ‘People of the village are also quite conservative. We have been subject to insulting comments from both men and women simply because we dance.’
‘I have not faced any resistance from my family, but people often come to us with upsetting remarks because of our ways. Nevertheless, these are things we’ve learnt to ignore over time,’ said Shelu Sharkar, another veteran Dhamail performer.
The patrons I came across during my trip included music teachers, performers, archivists and others who strive to hold on to this tradition. Today, their endeavours are primarily concerned with preserving, upholding and encouraging the traditions of Dhamail for the next generation, to save it from extinction. ‘It is part of our culture,’ was a common answer justifying their reasons for doing what they do; to a point that it almost felt uninspiring. Sure, it could be a good enough reason as any, but it felt like there was more to it.

Ram Krishna was my person of contact during the trip. We went to Sylhet by his invitation—he was organising a Dhamail workshop at the time. Krishna devotes his time in preserving Dhamail lyrics —presently he has two published anthologies, alongside which he seeks performance opportunities for artistes. But professionally he works amongst the support staff for a local school, something which came as a shock to me. He earns less than a $100 a month, which he uses to support his wife and three daughters. Interestingly, he often has to invest money from his own humble earnings to be able to support the Dhamail cause. ‘It is part of our culture’ did not seem like enough of an answer to justify his ways.
‘My father was an instrumentalist, he would travel in Sylhet, Assam, Kolkata, amongst other places during pre-partitioned India, and he would perform his music, often accompanying Dhamail artists. He passed away a long time ago. But Dhamail was introduced to me by my mother. She taught my sister and I have still have vivid memories of her performing. I loved my mother and, as she grew old, I realised I did not have it in me to be around her during the time of her death. After she passed away, my sister took care of the burial and funeral services. Even to this day I don’t know what my mother’s last words were. She was not around to see what I did, and what I continue to do for Dhamail, but I feel like I have her blessing and prayers with me when I take on this endeavour. This was her legacy to me, and I want it to live long enough for me to pass it down to my daughters,’ Ram Krishna shared.
‘As a little girl, every time I would see my mother and aunts perform I could barely sleep at night,’ said Anjali Chakrabarthy.
Anita Dev, a local music and dance instructor, told me with immense pride in her voice, ‘My mother is a very talented Dhamail artist; she taught me everything I know.’
‘Hold on to Dhamail for as long as you can,’ were one of the last words spoken to Shelu Sharkar by her mother-in-law before she passed away.

And suddenly it all made sense.

Shah Nahian is a writer and sub-editor from Bangladesh. A music, art and film enthusiast; Nahian began his career as a journalist and has worked for The Independent and Dhaka Tribune, amongst others. He is presently the Content Manager at Bengal Foundation.

Tags: In the memory of