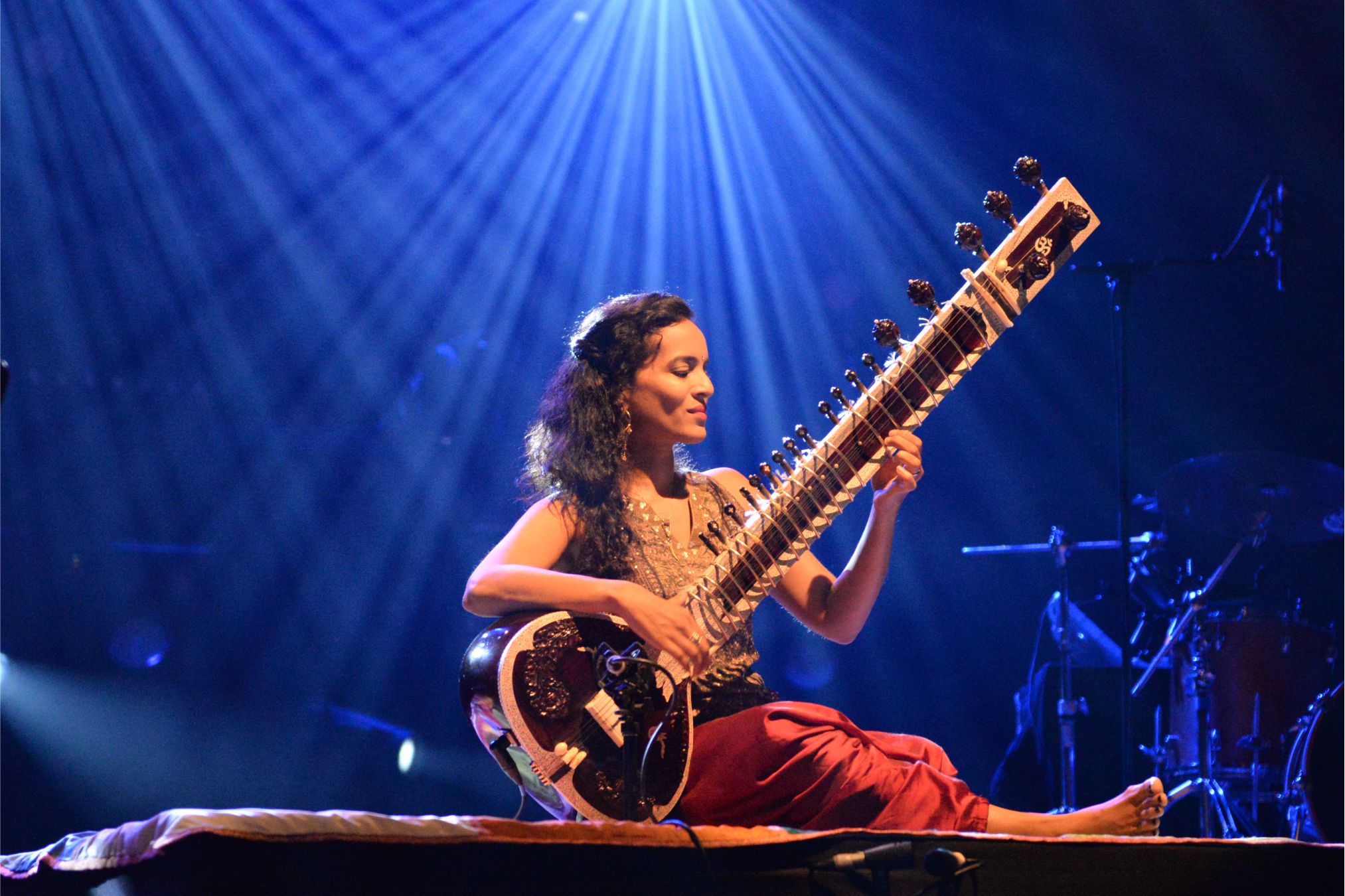 Anoushka Shankar: the melody and the muse

Through her bold and collaborative approach as a composer, Anoushka has encouraged cross-cultural dialogue while demonstrating the versatility of the sitar across musical genres. Her work with musicians such as Sting, MIA, Herbie Hancock, Pepe Habichuela, Karsh Kale, Rodrigo y Gabriela, and Joshua Bell has allowed her to experiment and grow as an artist, and add to her wonderful repertoire of music.

In May 2016, a concert was held in the prestigious Royal Albert Hall in London to salute the legacy of the late sitar maestro, Pandit Ravi Shankar. Titled ‘A Classical Odyssey’, organised by Blues Communications, the tribute concert featured a solo performance by his daughter, the sitar doyenne Anoushka Shankar. Joining her in this classical journey were other maestros such as Pandit Hariprasad Chaurasia (on the bansuri flute), Pandit Shiv Kumar Sharma (on santoor), and the violin virtuoso, Dr L Subramaniam. The concert also featured, two Bangladeshi artists, Luva Nahid Choudhury and Aditi Mohsin.
Anoushka Shankar is known as a fusion artiste throughout the contemporary music scene. Her work with her father Ravi Shankar, who has popularised Indian classical music in the West, has redefined the genre of fusion and improvisation. A singular figure in Indian classical and progressive world music scenes, she became one of the first five female composers to have been added to the UK A-level music syllabus.
Anoushka began training on the sitar with her father at the age of seven. As part of her training, she accompanied him on the tanpura at his performances from the age of ten, thereby becoming acclimatised to the stage. Anoushka gave her first public sitar performance in 1995 at the age of 13, at Siri Fort in New Delhi as part of her father’s seventy-fifth birthday celebration concert. In this solo debut, she was accompanied by tabla maestro Ustad Zakir Hussain.
Through her bold and collaborative approach as a composer, Anoushka has encouraged cross-cultural dialogue while demonstrating the versatility of the sitar across musical genres. Her work with musicians such as Sting, MIA, Herbie Hancock, Pepe Habichuela, Karsh Kale, Rodrigo y Gabriela, and Joshua Bell has allowed her to experiment and grow as an artist, and add to her wonderful repertoire of music. She has also worked with the world’s leading orchestras such as London Symphony Orchestra, London Philharmonic, MDR Sinfonieorchester, Lucerne Symphony and Orpheus Chamber Orchestra, and has performed in some of the most coveted venues of the world.
Anoushka won many awards and received several Grammy nominations for her extraordinary projects. By the age of 20, she received her first Grammy nomination and become the first Indian female and youngest-ever nominee in the World Music category. Her latest work and fourth album, Land of Gold, was released in 2016 and embodies her heartfelt response to the traumas and injustice experienced by refugees and war victims.
As Nitin Sawhney once wrote about her album Traveller, ‘no one embodies the spirit of innovation and experimentation more evidently than Anoushka Shankar.’ In this interview, conducted via email before the concert at Royal Albert Hall, Anoushka shares her views on musical composition, improvisation, and on blending Western and Eastern forms of music.

Hi Anoushka, thank you for taking the time to answer these questions for us and Jamini’s readers! I’d like to begin by asking you a question about composition and performance. Along with playing composed pieces, you have also created a lot of your own music, and this is a question most people are curious about: when it comes to musicians who create their own music, which part of the musical process do you enjoy the most—the composition or the performance? How are the vibes for the two different from each other?

There are actually three parts as I see it: composition, performance, and improvisation. The thread can happen in front of an audience and therefore combine the previous two parts. In some ways this becomes the ultimate expression. I’m not always a fan of improvisation for the sake of it but when all the elements come together – great collaborators, a great composition or framework, a good venue and audience – then it can be the most magical experience.

In your fusion music, whether it is a live performance or music videos, you incorporate visual elements that work to enhance the overall experience. How important do you think external elements are in creating a synesthetic musical experience?

We are sensory creatures, and the more engaged an audience can be, then the more immersive their experience. Having said that, I have mixed feelings about very intensive visual elements at musical shows. Depending on the type of show, they can hugely enhance the experience—for example, when watching DJs create music live, the music can be wonderful, but it’s not exactly exciting to watch people work on laptops. So visuals can be the perfect solution. But sometimes, when I’m watching live musicians, intense visuals can be distracting.

For me it’s about thinking carefully about where I want the focus of the be, and good lighting can play a key role in directing people’s eyes and ears to the right places.

As a listener I have found that your music, particularly your fusion work, creates a bridge between traditional listeners and new listeners. This is different from the pure classical music you used to play with your father. Do you feel that you carry that original legacy into your new work, or is this your way of creating a new style? Also, is it possible to keep the genre alive in its pure form?

I’m so glad you enjoy my experimental work! However, classical music isn’t just something I ‘used’ to play with my father; but is something I still do now. I totally believe one can keep classical styles alive while also pushing boundaries and creating new sounds. It takes some focus and sensitivity but is absolutely possible.

Taking about composition, traditionally, the Indian form of classical music is unscripted and is handed down through oral renditions, recordings, or practice. In contrast, the Western classical form has always been scripted. How do you work around that when you’re working on a fusion piece? When you compose, do you use both scripted and unscripted music? How do the components come together?

That’s exactly right. Often with my bands, there’s a process of making charts and writing music for the Western musicians, and orally teaching the same music to the Indian musicians! The craziest experience was with Traveller, my flamenco record, as we had to teach the Indian and Spanish musicians in three different languages, all orally, but in different time cycles that worked for their own individual skill sets!

You have two beautiful sons now. Has becoming a mother changed the way you approach and experience music?

As an artist I’m profoundly affected by my own life and the changes I go through—that is unavoidable as I make music from a very deep emotional place. It’s probable, therefore, that becoming a mother has had the hugest impact on my music, though I would struggle to define exactly in what way. I think I’ve become a lot more sensitive and vulnerable, and also strong and passionate, and I feel more able to express emotions and connect with people when I play, as a result.

If you could time-travel to any musical era, which one would it be and why?

I’d love to tour through various eras. There are people worldwide I’d love to hear, from before we could record them—for example, Tansen or Mozart. But I’d love, also, to travel to the 1920s and hear jazz, to the 60s to hear legends sing in small bars, and to the 40s and 50s to hear my dad when he was younger.

Kashfia Arif holds an MA in Critical Media and Cultural Studies from SOAS (UoL). Her areas of research and interest include pop-culture and social media with particular focus on music and culture. She has worked in publishing working as the Assistant Editor for the magazines Six Seasons Review and Jamini. She is currently teaching media studies and journalism at the University of Liberal Arts Bangladesh.

Through her bold and collaborative approach as a composer, Anoushka has encouraged cross-cultural dialogue while demonstrating the versatility of the sitar across musical genres. Her work with musicians such as Sting, MIA, Herbie Hancock, Pepe Habichuela, Karsh Kale, Rodrigo y Gabriela, and Joshua Bell has allowed her to experiment and grow as an artist, and…

Tags: Anoushka Shankar: the melody and the muse

Finding music in ‘moments of mishearing’